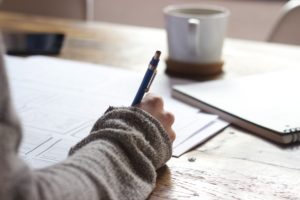 At the CCAHT, we are committed to upholding and protecting client safety and confidentiality. To this end, names and some details have been changed or omitted.

Ariana is a 35-year-old female with a college education who, through a series of unfortunate events, found herself homeless and battling a substance addiction. What hurt Ariana the most was losing custody of her children. After spending some time in jail, Ariana was referred to the CCAHT through her probation officer to help separate her from her traffickers and facilitate the necessary support for getting herself back on her feet.

Ariana acknowledged that her vulnerability to victimization was influenced by inconsistency in maintaining housing and having her basic needs met. From day one, Ariana was determined to use this opportunity to maximize the potential she knew she had. The CCAHT safe house allowed Ariana the solid foundation she needed to begin to organize her goals and determine the steps she needed to take to achieve them. Immediately, the CCAHT staff recognized her potential and praised the diligence and dedication shown by Ariana. Ariana acknowledges the CCAHT empowerment approach, as evidenced by her statement: “I appreciate the opportunity y’all have given me to show that I’m a responsible adult.” The CCAHT staff have worked around the clock to provide encouragement and support toward Ariana’s success, but the hard work and passion Ariana has shown is admirable, to say the least.

Ariana is working diligently toward earning a job and housing of her own. She is able to see her children almost daily while still maintaining sobriety and compliance with her terms of probation. Ariana works with the CCAHT therapist and her personal care coordinator as she forges a new path of opportunity for herself. Ariana recently expressed her gratitude:

“There are not even words to express how happy I am to be where I’m at right now in life and a lot of that has to do with the people I’ve met being in this house…[it makes me so happy] that you all are so proud of me and in my corner.”