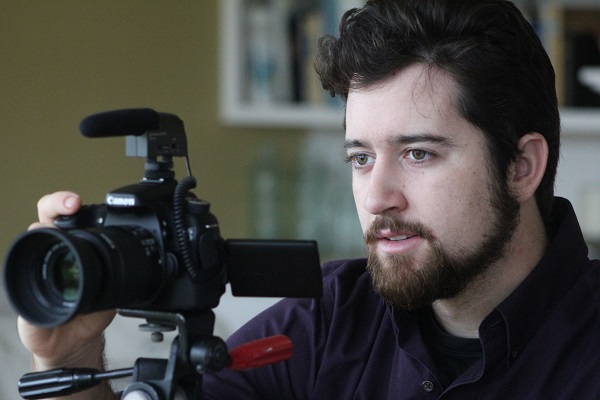 Behind the Lens: Jordan Eplett

I grew up in the countryside of southeast Michigan, just 60 miles north of Detroit, outside a little town called Riley. My parents raised me on some basic principles of life: love your country, honor your God, love your family, and fight for those who are defenseless. These principles have been engraved in my heart and mind for my entire life, and I put forth my greatest effort to stand by them in all I do. One day, I hope to teach them to my children, and then to their children.

For most of my young life and throughout high school, I worked in the construction and home remodeling industry for my father, but nothing could satisfy my love and passion for filmmaking and the art of visual storytelling. I’ve always had an eye for the camera lens; one could say I ‘think in pictures,’ which I think would be a pretty accurate statement. Everywhere I go and everything that meets my eye, all I see is a story to be told through the motion pictures.

So in my late years of high school, I began studying filmmaking and videography. I was, and still am, entranced by it! I loved being able to express feelings and desires through visual storytelling. I bought my first camera when I was 19 and began making videos of my own, practicing everything I was learning from online sources and from volunteering for a friend who worked in the film industry. In January 2013, I moved from Michigan to Lebanon, Tennessee, where I began working for a film and video production house that aired a Roku channel 24/7 from a live stream studio. I did everything from writing and directing to assistant directing, audio engineering, cinematography, and post-production. After working with them for about two years, I moved into the independent film market as a private contractor and started Trevor Picture Innovations.

During a film project I was working on in early 2016, I learned about CCAHT from a close friend of mine who was also working on the project, and he told me about how CCAHT was building a force in East Tennessee against the human trafficking issue. My heart has always been grieved by the issue of human trafficking: how on earth a person could offer a fellow human being to be sold for sexual purposes like a retail product makes my spirit weep with a heavy sorrow. I always knew that I could use my love for filmmaking to help shed at least a little light to the public on this terrible industry. I had to contact CCAHT, which I did, and I was impressed with the ideas and the passion that leadership had for helping raise awareness to the public and helping the survivors of the industry. It wasn’t until I began volunteering with CCAHT that I started learning about the heartless industry of human trafficking in greater detail. I’ve had the honor of being able to volunteer by shooting several videos for CCAHT, one of which was a heart-wrenching story of a survivor who shared, in brief detail, the atrocities she had endured. As an artist and filmmaker, I look forward with great anticipation to see what the future holds for CCAHT, how they will impact this country and those affected by human trafficking, and how I can help raise awareness with them through the art of filmmaking.